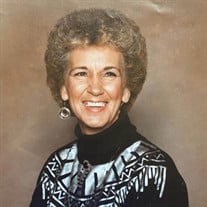 Cora May McGough Walton, 85, of Ranger, Texas. Passed peacefully from this life on February 17, 2022, embraced by the love of her family. At her request, Cora May will be cremated and her ashes buried at Evergreen Cemetery in Ranger, with a small family service. Cora May was born August 23,1936 to Roy Gilbert McGough and Flora Edna Parent McGough at Mirror Lake, Texas. She attended Ranger Schools and as an adult continued her education at Ranger Jr. College. On August 8, 1953 she married the love of her life Clifton “Chip” Walton. Together they raised four daughters, she was a devoted wife, mother and Nana. In her teens, Cora May worked with her dad at his car dealership in Ranger and at the Porky Pig. Later on she worked as a Nurse’s Aide and Medication Aide at Western Manor Nursing Home, A Clerk at JRB and Quality Foods, Supervisor of House Keeping at Ranger General Hospital, and Manager of the Ranger Swimming Pool. Cora May, truly loved her family, friends and everyone around her right where they were in life. She raised daughters to know Christ and guided them to build a strong christian foundation. She gave them the love of music and taught them to love and accept people beyond their circumstances, and to be compassionate and empathetic. She often said,“If you see something good or admirable about someone don’t just tell others. Tell that person, they need to hear it too.” As Nana, she was the ultimate grandparent. Giving them all a special name and never failing to remind them just how special they were in her eyes. She taught them to laugh, love and play everyday. She shared with them her love of music, singing and dancing. She was always up for an adventure and encouraged them to be brave and try new things. They will greatly miss her wit, abundant love, and above all else her Nana hugs and Nana kisses. We will all miss her sparkle. She is proceeded in death by her parents Roy and Edna McGough, Beloved In-Laws;Charlie Walton Sr. and Elberta “Bertie” Walton, Infant Son; Randy Walton, Infant Grandsons; Mark Conner and Clayton Walton, Brothers; Melvin “Penny” MCGough and Roy Lee McGough, Sisters; Ethel Crawford and Clara “Buckles” Brewer, Son-In-Law; Thomas Wayne Creswell Sr. She is survived by her husband, Clifton Walton, Daughters; Mona Creswell of Vandervoort, AR, Tawana Conner and husband David Conner of Ranger, TX, Robbie Camacho and husband Arthur of Haltom City, TX, and Cynthia Walton of Llano, TX. Brothers; John McGough and wife Mary, Robert McGough and wife Pam, and Roger McGough and wife Tena, Sisters; Martha “Darlene” Boggs and Evelyn Fletcher, Grandchildren; Randi Guess Chappell and husband Bram, Jason Guess and wife Meredith, Toni Camacho Ferguson and husband Paul, Genesa Camacho, and Chelsea Walton Steinberger and husband Sammy. Step Grandchildren; Wayne Creswell Jr. and wife April, Kevin Creswell, Tabitha Creswell Self and husband Rayce, Great Grandchildren; Bailey Chappell and wife Lindsay, Conner Chappell, Hayden Chappell, Jordy Guess, Kyle Guess, Santino “Sonny” Camacho, Samuel “King” Steinberger and Ryver Steinberger. Step Great Grandchildren; Dusty Dinger Morgan Robbins and husband Ryan, Skylar Jasmine Lightner and husband Kenny, Justin Creswell, Shela Creswell, Paisley Creswell, Saylor Creswell, and Callie Creswell. Nine Step Great Great Grand Children. Rest in peace, Cora May/Corie/Mama/Nana. We hope you dance!

Cora May McGough Walton, 85, of Ranger, Texas. Passed peacefully from this life on February 17, 2022, embraced by the love of her family. At her request, Cora May will be cremated and her ashes buried at Evergreen Cemetery in Ranger, with a... View Obituary & Service Information

The family of Cora May Walton created this Life Tributes page to make it easy to share your memories.

Send flowers to the Walton family.