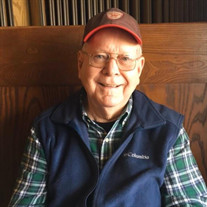 Charles David Wolford Sr., 80, of Ranger Texas, passed away on January 23, after a short illness. He was born on March 31, 1941 to Elizabeth (Betty) Davenport and Charles Ira Wolford in Ranger. He graduated from Ranger High School and attended Ranger College. He was a proud member of the Ranger Bulldog Football team. “Once a Bulldog, always a Bulldog”. He married Dixie Mae Durham and they moved to Merced, California where his son Charles David Wolford Jr. was born. He was preceded in death by his mother, father, sister Annlee Kim, and nephew Christopher Wolford Kim. He worked as a truck driver and a salesman for several years before starting his own Vending Company in Houston, Texas. In 1991 he married Gay Ann Daskevich, his high school sweetheart and the Love of his life. It was a match made in heaven and they enjoyed 30 joyful and loving years together. In 2001 they returned to Ranger and Charles went to work for Edwards Funeral Homes where he worked until just weeks before his death. He never met anyone he couldn’t have a conversation with. He had a sense of responsibility and care for all those he loved be it family, friends or coworkers. He will be missed for many reasons but his clarity, common sense and care for all those he loved will be chief among them. He is survived by his wife, Gay Ann, son Charles Wolford Jr. and partner Chris Keller, step-daughter Lorie Westover, grandchildren Chris Johnson and wife Katy, Angie Cross and husband Brad, and Crystal Westover. Greatgrandchildren Cole Cross, Chloe Cross, Emma Johnson, Tank Johnson, Charli Ann Johnson, and Ally Ann Ewing; niece Vicki Dullye, nephew David Kim and many dear friends all of whom were very special to him. Services information: A memorial Mass will be held at 2:00 p.m. Friday, Jan. 28th at St. Rita Catholic Church in Ranger. Online condolences may be left at: www.edwards-funeral-homes.com.

Charles David Wolford Sr., 80, of Ranger Texas, passed away on January 23, after a short illness. He was born on March 31, 1941 to Elizabeth (Betty) Davenport and Charles Ira Wolford in Ranger. He graduated from Ranger High School and attended... View Obituary & Service Information

The family of Charles David Wolford Sr. created this Life Tributes page to make it easy to share your memories.

Charles David Wolford Sr., 80, of Ranger Texas, passed away on...

Send flowers to the Wolford family.