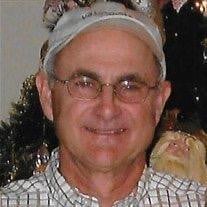 Brett Ernest Madison, 69, passed away on February 8, 2020 at his home in Bartlesville, Oklahoma, after a long battle with Parkinson's disease. A service honoring his life will be held on Monday, February 17, 2020, at 11:00 a.m. at Edwards Funeral Home in Eastland, Texas. A visitation will be held at the same place on the same date from 9:00 a.m. to 11:00 a.m. Arrangements are under the direction of Stumpff Funeral Home in Bartlesville and Edwards Funeral Home in Eastland. Brett was born to Doyle and Jessie (Sanford) Madison in San Angelo, Texas, on October 14, 1950. He married Nancy Burns on December 30, 1970 in Odessa, Texas, and they were married for 49 years. Their union was blessed with two children, Whitney Dyer of Bartlesville, Oklahoma, and Reagan Madison Fort of Owasso, Oklahoma. Brett was part of a military family and lived in various states before his family settled in Del Rio, Texas, in 1962. He graduated from high school in Del Rio and attended college at Texas Tech University, where he earned a degree in electrical engineering. Brett then entered the U.S. Air Force and was assigned to Dyess Air Force Base in Abilene, Texas. After proudly serving his country as a navigator for six years, Brett went to work as an electrical engineer for West Texas Utilities. He also began working towards his Master’s Degree in Electrical Engineering, which he earned remotely from Georgia Tech after many years of balancing work, family, and school. In 1991, Brett went to work for Public Service Company of Oklahoma/American Electric Power in Tulsa, Oklahoma. In 1994, he moved his family to Bartlesville and worked there a short time before returning to the Tulsa office, where he continued to work until his health forced him to retire. Brett was loved more than he knew. He was the kind of husband who wrote love notes and poems to his wife and the kind of father who rode bikes, swam in the pool, and played baseball with his kids. Brett was never one to sit on the sidelines. He helped his kids with their homework, showed up for all of their events, and fostered and encouraged their dreams. Brett was determined, hard-working, and never satisfied to sit still or remain stagnant. Education, personal growth, and his career were very important to him, and he was always looking for ways to challenge and improve himself. Although his accomplishments were many, few people knew of them, as Brett was incredibly humble and rarely spoke of them. He was simply satisfied to prove to himself what he could do, even if no one else knew. Brett was a deep thinker and loved to read, learn, and study, especially God’s Word. He was loving, patient, kind, and gentle, but he was also smart, strong, and funny. He loved to play golf, especially with his dad and brothers, and he loved to listen to music, take pictures, and watch Clint Eastwood movies. His family members love and appreciate him for the person he was, and although they miss him terribly, they know he is finally resting in peace in his new home with his Heavenly Father. Brett is survived by his wife, Nancy; his two daughters, Whitney Dyer and husband Jay, and Reagan Madison Fort and husband Justin; his five grandchildren, Lyla, Wyatt, Avery, Alyssa, and Logan; his brother, Jim Madison and wife Elizabeth of Arlington, TX; his two sisters, Clara Anne Madison and husband Ed Dandridge of Shreveport, LA, and Patricia Madison Davis and husband Barton Davis of Nacogdoches, TX; his sister-in-law, Cara Madison of Plano, TX; four nieces; and three nephews. He was preceded in death by his parents and his older brother, Steve Madison.

Brett Ernest Madison, 69, passed away on February 8, 2020 at his home in Bartlesville, Oklahoma, after a long battle with Parkinson's disease. A service honoring his life will be held on Monday, February 17, 2020, at 11:00 a.m. at Edwards Funeral... View Obituary & Service Information

The family of Brett E. Madison created this Life Tributes page to make it easy to share your memories.

Send flowers to the Madison family.