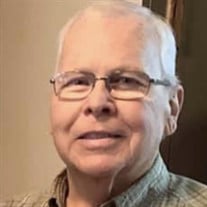 OLDEN – Bobby G. Boyett, age 73, went home to be with the Lord Thursday, October 3, 2019 surrounded by his loving family. Services for Bobby will be at 10:30 am Saturday, October 12, 2019 at the Leon River Cowboy Church in Olden. Family and friends will gather Friday, October 11 from 6-8 pm at Edwards Funeral Home, 411 S Mulberry, Eastland, TX. Burial will be at the Eastland City Cemetery. Bobby Gene Boyett was born October 4, 1945 in Eastland, TX to Ferrell and Mary Williamson Boyett. He grew up in Olden and was a proud graduate of Olden High School where he set a district record in the Discus throw and placed in the State Track finals his senior year. After graduating in 1964 he moved to Ft. Worth and went to work for the Texas and Pacific Railroad (which later became the Union Pacific Railroad) as a Signal Technician. While working for Railroad he testified before a Presidential Emergency Board created by then President Ronald Reagan in 1986 and helped with the railroad contract negotiations at the time. Bobby has also been a continuous member to the Brotherhood of Railroad Signalmen for over 50 years. Bobby loved working and often took classes to help him be the best in his field, having attended Tarrant County College, Elkins Institute of Technology and classes at Salt Lake City College. After retiring in the early 2000’s, Bobby moved back home, to Olden, in 2005. On April 7, 2007 he married Laverne Cate in Olden, TX. Bobby was a notorious story teller whom you would want to question if what he was telling was true but more often than not, his stories were true. He loved his family, his friends and working, but in his spare time he did enjoy fishing and taking motorcycle rides through the Hill Country. He was an active member of the Leon River Cowboy Church where he was proud to be elected to serve as an Elder. He is survived by his loving wife, Laverne Boyett, son; Brad Boyett and wife Mindy, and daughter; Kimberly Stokes and husband Gary, sons; Shannon Scarlett and wife Jannet, Richard Neefe and wife Wendy, and daughter; Sonia Hicks and husband Cliff, Grandchildren: John, Justin, Harrison, Addison, Aaron, Shauna, Haley, Brent, Wesley, Rodney, Leo, Tyler, Reid and Ryan. Bobby is also survived by a brother, Tommy Boyett and numerous nieces and nephews. Bob was preceded in death by his parents, Ferrell and Mary Boyett, a brother, Sammy Boyett and a loved daughter-in-law, Stefany Boyett. In lieu of flowers, the family request donations be made in Bobby’s name to Olden Homecoming Association for the Travis Hilliard Scholarship, PO Box 224 Olden, TX 76466.

The family of Bobby G. Boyett created this Life Tributes page to make it easy to share your memories.

Send flowers to the Boyett family.