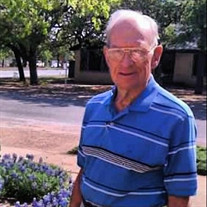 EASTLAND – Dr. Bob Alexander, long-time family practitioner in Eastland, age 89, went home to be with the Lord Wednesday, October 3, 2018 at his home. Services for Dr. Bob was 2:30pm Sunday, October 7, 2018 at the First United Methodist Church, 215 S. Mulberry, Eastland, TX. Family and friends gathered for a time of celebration on Saturday, October 6, from 5-7 pm at Edwards Funeral Home, 411 S. Mulberry in Eastland. Burial was at Eastland City Cemetery. Billy Bob Alexander was born January 21, 1929 in Anson, TX to William Leonard and Mary Robbie Ringo Alexander. He was a graduate of Gordon High School, University of Texas School of Pharmacy, and the University of Texas Medical Branch at Galveston. He served in the United States Army from 1956 to 1958, ultimately achieving the rank of captain. Dr. Bob started out working as a pharmacist in Strawn, Texas, before being accepted to medical school. After medical school, he moved to Eastland and set up his family practice with Dr. Harold Bulgerin. Many people in and around Eastland are able to say that Dr. Bob was the first face they ever saw, as he delivered hundreds of children at EMH. The new Labor and Delivery Rooms at EMH were dedicated to Dr. Bob in honor of his over five decades of service as a caring physician to the surrounding community. Dr. Bob married Alice Sue Owens on May 28, 1949. They had four children: Marilyn Kay, Robin Jean, Terry Don, and Jolynn. He married Patsy White Chick on July 5, 1975. Together they raised her two children, Craig and Lisa, and were together for 32 years until her death in February of 2007. Dr. Bob was a kind, generous, and loving soul, who touched many lives in the Eastland area. He has received many accolades through the years, including the Eastland Man of the Year award and the Golden Deed Award from the Eastland Chamber of Commerce and, one year before his death, the Grand Marshal of the Old Rip Festival. These awards acknowledge the generous work done by Dr. Bob on behalf of his community, including his tenure as president of the Eastland Independent School District Board from 1962 until 1968, during which time local elementary schools were consolidated and Siebert Elementary School was built. In honor of his 70th birthday, the Texas legislature passed a resolution in recognition of his life of service. He was a member of the Eastland Lions Club, the Board of Trustees for the Eastland Memorial Hospital, Texas Medical Association, and First Christian Church in Eastland, where he served many years as the Chairman of the Board and Elder; he was named Elder Emeritus in 2018. He volunteered at the Senior Food Pantry. He supported many charities, including St. Jude’s Children’s Hospital, Scottish Rite Hospitals, and Happy Hills Farms. In his spare time, he loved spending time with family and friends, gardening, golfing, and dancing. He was also an accomplished pilot. Above all else, Dr. Bob loved nothing more than a friendly ribbing, a practical joke, and a good laugh. He is survived by his children, Kay Hunt and husband, Phil; Robin Harvey and husband, Danny; Terry Alexander and wife, Debora; Jodi Madden; Craig Chick and wife Kate; and Lisa Chick and husband Greg Gambrell; grandchildren, Carrie, Scott, Jordan, Brandon, Brooke, Gunnery Sergeant Zachary, Stephanie, Savannah, Eloise, and Cullen; great-grandchildren, Michael, Jason, Madelyn, Baylee, Evan, Elizabeth, Katherine, Benjamin, and Matthias; and sister, Texie Haney. He is also survived by his dear friend and dance partner, Dorothy Tonne. Dr. Bob was preceded in death by his parents, wife Patsy Alexander and Sue Alexander, the mother of his beloved children, and a great-granddaughter, Sophia Warner. Pall bearers will be Brandon, Michael, Jason, Scott, Jordan, and grandson-in-law Shane. Honorary pall bearers will be Zachary Alexander, Michael Madden, Thomas White, Gary Wilson, Cullen Chick, Grant Easton, and life-long friends Calvin Stoner and Don Stoner. In lieu of flowers the family request donations be made to the Eastland Memorial Hospital in Dr. Bob’s name to help with purchasing a new CT Scanner. This was a need near and dear to Dr. Bob, who served as the hospital Chief of Staff and Physician Director of Radiology for many, many years. Donations should be sent to EMH, Attn: Rebecca Murray, PO Box 897, Eastland, TX 76448.

The family of Dr. Bob Alexander created this Life Tributes page to make it easy to share your memories.

Send flowers to the Alexander family.