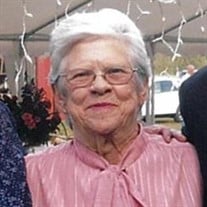 Betty Jo Holder, 83 off Ranger, Tx, passed away Sunday February 13, 2022 peacefully in her sleep. Services will be held on Monday February 21, 2022 at Edwards Funeral Home in Ranger with visitation from 11-12 and graveside services at 1 p.m. at Evergreen Cemetery in Ranger. Betty was born on December 10, 1938 to Lewis Draper and Ida Johnson Draper. She had one sibling, Joe Johnson. Betty attended school until 10th grade in Stephenville. She later married Elbert Holder in March, 1967 and they were happily married for many years. Survivors include daughter, Sandy Fritz (Todd) of Austin, Tx; grandchildren, Jordan Fritz of Smithville, Austin Fritz of Austin, Brandy Konarsky (Chet) of Thrall, Tx, Nichole Arzola (Albert) of Taylor, James Jr. and Jane Holder; great grandchildren, Dalton, Dylan (Skyler), and Dakota Konarsky, Zack, Ashlyn, Alex, Jace and Jax Arzola; great-great granddaughter, Jessie Konarsky. In her younger years Betty worked at MHMR in Stephenville for many years. She later worked at Ranger nursing home for many years as a cook. She also cleaned houses, ironed, and was a caregiver to many. Betty enjoyed her time as an American Legion Ladies Auxiliary member. Betty and Elbert enjoyed camping and traveling to many states vacationing. She is preceded in death by her parents, Lewis and Ida Johnson Draper; daughters, Susie Bolling and Janie Henson; sons, Mike and James Holder; and brother, Joe Johnson. We would like to thank her caregivers, Vickie Histed and Charlene Wilson for taking such wonderful care of her the last few years.

Betty Jo Holder, 83 off Ranger, Tx, passed away Sunday February 13, 2022 peacefully in her sleep. Services will be held on Monday February 21, 2022 at Edwards Funeral Home in Ranger with visitation from 11-12 and graveside services at 1 p.m.... View Obituary & Service Information

The family of Betty Jo Holder created this Life Tributes page to make it easy to share your memories.

Send flowers to the Holder family.