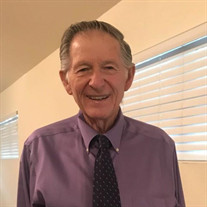 Pastor Benny Ray Little, son of the late Ray Little and Mrs. Irene Sims (Little) Holland of Brownfield, Texas, was born August 25, 1941 in Stockton, California. The oldest of four siblings, he was raised by his mother and step-father, Earl Holland, from infancy, and Mr. Holland was a true father to Benny. Raised near Brownfield, Texas on a cotton farm, Benny played football in high school and went on to become a sheet metal worker and a welder. He had two sons and a daughter. Pastor Little’s life was forever changed in June 1986 when he accepted Jesus as his savior and was called to preach. During the 1980s, he worked in the Singles Ministry at Jimmy Swaggart’s Bible School where he met Judy Breazeale. The two developed a great friendship over several years, and on May 16, 1993, the two were joined in marriage, a union they would share for 27 years. He loved Judy deeply, referring to her always as “My Judy”, and endeavored with all of his heart to carry out Ephesians 5:25, “Husbands, love your wives, just as Christ loved the church and gave himself for her.” Through the School of Christ International, Benny took part in two pastor conferences in Peru, South America. He preached at many revivals and in several prisons, including Huntsville Prison and Breckenridge Prison in Texas. He led the Eastland County Jail Ministry from 2009-2020. He became pastor of Gospel Ministries at Lake Leon in 2007, where he served until his death. Pastor Little was known for his generous heart, outgoing personality, witty sense of humor and love of Jesus. A prankster from childhood, he was always quick to pull a joke and make his wife and others laugh. Owing no man but a debt of love, he always did what he could to meet the needs of others. He was loved by many and never met a stranger, always able to draw just about anyone into conversation. His favorite hobby was fishing, and he was a fisherman of the truest sort, fishing the lake and being a ‘fisher of men.’ He liked most to talk about Jesus, and every conversation inevitably turned to talk of his Lord. He made many life long friends out fishing on the lake, and always had some little story to tell to keep those around him laughing. He spent much of his time reading his Bible and praying for others, as well as spending time with his family, laughing and enjoying life. Becoming very ill in the summer of 2018, he was transported by ambulance to Fort Worth, at which time he heard Jesus tell him to “Trust me”. Diagnosed August 4, 2018 with pancreatic cancer, Pastor Little was given two to three months to live if he chose no treatment. His cancer was deemed inoperable, and he chose to forego chemotherapy, and chose pain management only. Remembering the words given to him, Pastor Little trusted Jesus through it all, continuing to share the love of Christ with anyone who would listen, while flabbergasting medical staff with his longevity in the face of his disease. After twenty-two months battling the disease, he went to be with Jesus, passing peacefully at home in Eastland, Texas, on June 10, 2020 with his wife by his side and his mother and sister present via Face Time. He was 78 years old. He was preceded in death by his father, Ray Little, his stepfather, Earl Holland, his brother, Gary Holland, and his eldest son, Ricky Little. He is survived by his wife, Judy Little of Eastland, Texas; his mother, Irene Holland of Brownfield, Texas; his sisters, Earline Dill of Lubbock, Texas; and Dana Liberatore, along with her husband, Phil, of Whittaker, California. He leaves behind his son, Brent Little, along with his wife Kim, of Phoenix, Arizona; daughter, Kristi Little of Eastland, Texas; grandson Matthew Little along with his wife, Tracie; grandson Keith Little along with his wife, Randy; and granddaughters, Star and Ivy Little. He has two great-granddaughters, Jacqueline Little and Claire MacKenzie, and great-grandson, Archibald Little. He will also be missed by his step-children, Tammie Cheshire, Debbie Breazeale and Robin Hudson, all of Wylie, Texas, along with their families. The viewing will be held Sunday, June 14, 2020 from 5:00 p.m. – 7:00 p.m. at Edwards Funeral Home in Eastland, Texas. A graveside service will be held Monday, June 15, 2020 at 10:00 a.m. at Staff Cemetery on Staff Road in Eastland, Texas, a memorial service will occur at a later date.

The family of Benny Ray Little created this Life Tributes page to make it easy to share your memories.

Send flowers to the Little family.