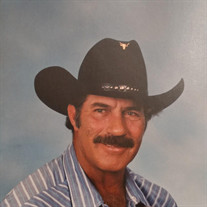 Ben Earl Cagle passed away at 81 on Thursday, January 16, 2020 surrounded by his loving family. He is well known around Eastland County for keeping the animals safe working security at the Eastland County Stock Show and for keeping the cows moving at the Cattle Exchange on Tuesdays. In the 60's he was a member of the Eastland County Sheriff's Posse. He enjoyed being a ranch hand working with his best friend Lloyd Coan for many years. He retired from the Texas Department of Transportation as a heavy equipment operator after 30 plus years. Ben grew up in Olden where he went to school and played basketball making many lifelong friends. He resided in Eastland where he has many family and friends. You could always find him drinking coffee and BS'ing everyone he ran into. He was a lover of life and cared deeply for animals. He loved working on the farm and feeding his cows. Ben worked extremely hard every day of his life and he loved the sun on his back. He will always be remembered by the jokes he told and the smile on his face. He was an amazing man that took care of not one, but two families. The first was raising three rowdy boys Chris Downard of Eastland, Steve Downard of Breckenridge, and Cleve Downard of Graham. In 1989 he met the love of his life Manuela, and took on the difficult job of raising a daughter, Keesha. Three years after marriage with his "Sweetheart" he was able to pass on the Cagle name with their son Levi. He raised all of his kids as his own and we will be forever grateful for the love and kindness he gave us. He is survived by his wife, Manuela Cagle, 4 sons, 1 daughter, 1 son-in-law John Orrell Jr. and seven of what he would say are the "Best Grandkids" in the world, grandsons Walter Downard, and Danny Downard, his early bird breakfast buddy Jack Orrell, grand daughters Arianna Downard, his little cowgirl Bristol Orrell, and two great grandkids Tucker Downard and Zyarah. Ben is also survived by many nieces, nephews, and cousins as well as adopted family including Keri Agnew and her son Kanon, and Tammy Holman. He is preceded in death by his mom Eula, 5 brothers and 3 sisters: J.W., Bill, Jaral, Raymond, Coy, Jessie Lee, Virginia, and Dessie Mae. Visitation will be on Friday, January 24th from 6-8 at Edwards Funeral Home, 411 S. Mulberry, Eastland and funeral services will be at the Leon River Cowboy Church on Saturday January 25th at 2 pm followed by graveside services at Eastland Cemetery. In Lieu of flowers donations can be made in his name to the Eastland County Livestock Raisers Association for the county stock shows, P. O. Box 795 Eastland Texas 76448. Online condolences can be left at www.edwards-funeral-homes.com

The family of Ben Earl Cagle created this Life Tributes page to make it easy to share your memories.

Send flowers to the Cagle family.