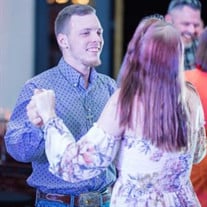 Barry Austin Allen, "Sugar Cookie”, as born in Odessa, Ector County, Texas to James Brady and Theresa Ann Cowan Allen on June 23, 1997. He grew up in Midland, Texas, Vernal, Utah, and Commerce City, Colorado. Austin went to be with the Lord on March 25, 2019, in Commerce City. Graveside services for Austin will be 11:00 AM Saturday, April 6th at Elm Cemetery in the Okra Community. A visitation will be held 6-8:00 PM Friday April 5th at Edwards Funeral Home in Eastland, Texas As a child Austin loved wrestling, dirt bikes, BMX, and skateboarding. He loved spending time with his family and friends and was always of good nature. He had a sweet, playful spirit and a serious, kind heart. He was gifted at making us laugh and adding smiles to our faces. As Austin grew more mature, fishing became his favorite pastime. Taught by his Papaw, they would spend every chance together in the boat or on the side of a bank. But, of the last 18 months, the biggest and most precious moments of Austin’s life were spent with his baby girl, Bryilee Kathern Marie Allen, who survives. That sweet spirit and kind heart reigned supreme in Austin when he was with his Bryilee. Along with Bryilee, Austin is also survived by his childhood sweetheart and Bryilee’s mother, Lyndsey Raye Larson, of Commerce City, Colorado; his father Brady of Rising Star, Texas; his mother Theresa and his brother and best friend, Brady Tyler Allen, both of Commerce City, Colorado. Surviving grandparents are Barry Arnold and Jackie Allen of Winnsboro, Texas and Anita Peterson Cowan of Corpus Christi, Texas along with a host of aunts, uncles, cousins, and friends. Austin was preceded in death by his grandmother, Kathern Nora Hurt Allen, and his grandfather, Daniel Phillip Cowan. Memorials may be made in memory of Barry Austin Allen to afsp.org American Foundation for Suicide Prevention.

The family of Barry Austin Allen created this Life Tributes page to make it easy to share your memories.

Send flowers to the Allen family.