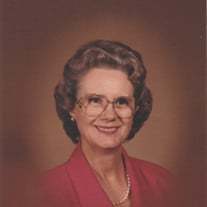 Barbara Raye Anderson Jones Brown Crudgington was a loving and kind wife, mother, grandmother, great grandmother and great-great grandmother. She went to her heavenly home on June 6, 2021 at 87-years-old after a long, fulfilling life. She was born to Bertha Lee Taylor and Aubrey Anderson on August 3, 1933. Raised by Robert Lee Alford and Bertha Lee Taylor Alford, Barbara had an active childhood with her grandmother Latha Fox Taylor, sisters Shirley, Sylvia and Ida and brother Robert (Bud) Alford. She graduated from Olden High School in 1950 before marrying Loyd Gordon Jones and becoming a mom to Lloyd (Bruce) and Robert (Bob). Barbara loved travelling, knitting, sewing clothes for her granddaughter, cooking delicious meals for her family, and going to church and musicals. Her long life led to fun Easter dinners, Sunday dinners, time at the lake with her parents and extended family. It also led to four granddaughters: Maria McKenzie Dulaney, Jennifer Jones, Joanna Jones McCord and Alison Jones Amate. She worked many years for TU Electric. She and her husband Loyd were members of Handley Baptist Church in Fort Worth until after his death in 1987. She later married John Brown and moved to Ranger to be closer to her parents and take care of her mom. After her mother and John’s death, she attended musicals with her dad where she met her husband Art Crudgington and moved to Breckenridge. They went to musicals around Breckenridge and Eastland where Art played guitar and fiddle for nursing homes and others. Barbara is preceded in death by her three husbands, her parents, her sister Shirley Lynch, and her granddaughter Natalie Jones. She is survived by her two sons, her four granddaughters, 12 great grandchildren and three great-great grandchildren. A celebration of her life will be held Friday, June 11 at 1 p.m. at Edwards Funeral Home in Ranger, TX. Visitation will be from 11 a.m. to 1 p.m. Interment will be at Merriman Cemetery in Ranger following the service. In lieu of flowers, donations may be made in her name to the Alzheimer’s Foundation.

Barbara Raye Anderson Jones Brown Crudgington was a loving and kind wife, mother, grandmother, great grandmother and great-great grandmother. She went to her heavenly home on June 6, 2021 at 87-years-old after a long, fulfilling life. She... View Obituary & Service Information

The family of Barbara R Crudgington created this Life Tributes page to make it easy to share your memories.

Barbara Raye Anderson Jones Brown Crudgington was a loving and...

Send flowers to the Crudgington family.