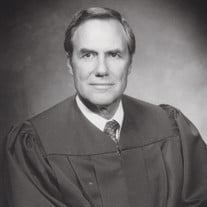 Austin McCloud, beloved husband, father, grandfather and friend, was called into the arms of his Lord and Savior on November 30, 2018. He was born March 17, 1929 in Edom, Texas, and grew up in Lubbock. He received his Bachelor of Business Administration from Texas Tech University in 1951. After serving his country in the U.S. Air Force during the Korean War, he received his Juris Doctorate degree cum laude from Baylor University in 1957. He then became an associate with the law firm of Fulbright, Crooker, Freeman, Bates and Jaworski in Houston. In 1960, he set up a law practice in Colorado City, Texas. He was appointed to the 32nd District Court of Texas as District Judge on August 31, 1963, where he served in that capacity through December 1970. He was elected as Chief Justice of the Court of Civil Appeals, Eleventh District of Texas, in November 1970, where he served until his retirement on December 31, 1994. Not truly ready to retire, Judge McCloud served as a Senior Justice to Texas Courts of Appeals, subject to assignment by the Chief Justice of the Texas Supreme Court. He was one of five chosen to serve on the Real Property Drafting Committee of the National Conference of Bar Examiners, which drafts the real property questions that are included on the multi-state bar examination. Judge McCloud was named Outstanding Jurist of Texas in 1994; served as President, Council of Chief Judges of Courts of Appeals of the United States 1993-1994; President, Council of Chief Justices of Texas Courts of Appeals 1991; and President, Baylor Law School Alumni Association 1975-1976. He was appointed by the Council of Chief Justices Texas Courts of Appeals to serve as an ex-officio member of the Texas Supreme Court Rules Advisory Committee and served on numerous other committees determining appellate procedure. He represented the Council of Chief Judges of Courts of Appeals of the United States at the first joint meeting of federal and state judges. He was also a member of the State Appellate Rules Committee, the Appellate Practice and Advocacy Section and the State Bar of Texas. He truly loved the law and its interpretation and was a man of unfailing integrity. As a long-time member of the Methodist Church, he taught Sunday School for many years. His deep faith and commitment to the Scripture was evident in the example he set. He is preceded in death by his parents, Hoyett and Velma McCloud. He is survived by the love of his life, Mary Anne Kelley McCloud; a sister, Loraine McCloud Culver; daughter, Melinda Musselman and husband, Henry; and daughter, Sharon Burgher. He was a loving grandfather to Louisa Musselman Fikes (Brendan), Luke Musselman (Julie), Molly Musselman Smith (McLean), Mary Peyton Burgher, Nancy Burgher Turnbull (Robert), and David Burgher III. He has proudly welcomed nine great-grandchildren into this world. He is also survived by numerous nieces and nephews. His life was a life well lived. “Well done, good and faithful servant.” Matthew 25:23. A memorial service will be held on Wednesday, December 5, 2018, at 1:00 p.m. at First Methodist Church, Eastland, Texas. A reception to celebrate Judge McCloud’s life will be held immediately following the service at The Austin McCloud Appellate Court Museum, 101 South Lamar Street, Eastland, Texas. He shall be laid to rest in a Family ceremony at the Texas State Cemetery in Austin, Texas. In lieu of flowers, memorial gifts honoring Judge McCloud’s life may be sent to: M.D. Anderson Cancer Center, Polo on the Prairie, P.O. Box 4486, Houston, TX 77210-4486 or Alpha Omega Hospice, 305 NE Loop 820, Hurst, TX 76053.

Austin McCloud, beloved husband, father, grandfather and friend, was called into the arms of his Lord and Savior on November 30, 2018. He was born March 17, 1929 in Edom, Texas, and grew up in Lubbock. He received his Bachelor of Business... View Obituary & Service Information

The family of Judge Austin Odell McCloud created this Life Tributes page to make it easy to share your memories.

Send flowers to the McCloud family.