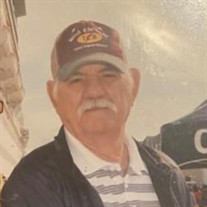 Arlie Casey, 82 of Ranger, Tx, passed away on August 27, 2021 with his loving family by his side after losing a battle with AML. Arlie Casey was born on April 17, 1939 to John B. Casey and Ada Mae Lankford Casey in Ranger, Tx. Arlie landed his first job in the oil field. He married his first wife, Emma Janunez Rushing, going on to having two children, Stephen Casey and Raynita Polkey. In 1962 he met Barbara Sue Stopkey and married the love of his life in 1963 in Odessa, Tx. And had three children, Mike Casey, Lyndie Fonville, and Linda Koger. Arlie was a force of nature, determined to provide for his family and give them the life he felt they deserved. His family meant more to him than anything else in the world, something he often mentioned. He was unendingly proud of his children and always tried his best to support them. Arlie was also passionate about antique cars and hot rods and could often be found out working on them when he was at home. He also liked fishing, camping, and watching westerns with his sons, as well as spending time with his grandchildren and great-grandchildren. Anyone who knew Arlie knew that he was the most loving father and husband a family could ask for. Arlie was predeceased by his loving wife, Barbara Casey; father, John B. Casey; mother, Ada Mae Lankford Casey; brothers, John Casey, Clinton Casey, Hansel Casey, Donny Casey; sisters, Laura Murdock, Morine Elliott, Louise Hendrix. He is survived by brothers, Billy Wayne Casey, MJ Casey, Mack Casey, Frank Casey; children, Stephen Casey, Raynita Polkey, Mike Casey, Lyndie Fonville, Linda Koger; grandkids, Jared Casey, Keaton Casey, Jonathan Polkey, Glen Polkey, Rachel Polkey, Kayla Fuentes, Kimberly Nichols, Krystal Monroe, Brittany Kinnard, Jacob Fonville, Nikita Winkler, Justin Koger, Kristina Koger. The family requests that all flowers and notes are sent to Edwards Funeral Home, 411 S. Mulberry, Eastland, Tx 76448. There will be a graveside service/memorial/celebration of life at 11 am Wednesday, Sept. 1st at Merriman Cemetery in Ranger, Tx. Online condolences for the family may be left at: www.edwards-funeral-homes.com.

Arlie Casey, 82 of Ranger, Tx, passed away on August 27, 2021 with his loving family by his side after losing a battle with AML. Arlie Casey was born on April 17, 1939 to John B. Casey and Ada Mae Lankford Casey in Ranger, Tx. Arlie landed his... View Obituary & Service Information

The family of Arlie Casey created this Life Tributes page to make it easy to share your memories.

Send flowers to the Casey family.