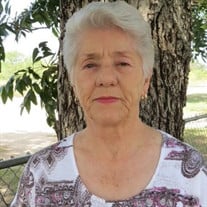 Alice Sparkman Hoover Alice Sparkman Hoover, 84, a beloved wife, daughter, mother, sister, grandmother, and great-grandmother, or as she was affectionately known by her family, “Granny”. She was welcomed into Jesus’s loving arms and joined many precious loved ones on October 3, 2018. Memorial service will be 10:00 a.m. Saturday, October 13, at Lone Camp Baptist Church. In lieu of flowers, please donate to the Lone Camp Baptist Hospitality committee where she enjoyed cooking and serving others. She was born July 11, 1934 in Mills County, Texas to Lewis and Mary Head Sparkman. She married Don Hoover on April 27, 1957. They celebrated 51 years of marriage before Don’s death in 2008. She was Mom to Donna, Linda, and John, and later to Tim, Craig, and Holly. She changed names in 1979 and became our beloved Granny. She was Granny to Meg, Josh, Ashley, Kiley, Coby, and Christopher; then along the way we added Wes, Heather, Ritchey, and Andrew. Later she became a Great Granny to Addie, Jack, Porter, Luke, Gentry, Josie, Clyne, Eli, Autry and Ransom. She had a heart that just grew with each addition. She grew up in a loving family and enjoyed 5 brothers and 4 sisters. She continued this as she began her family. She enjoyed any activity with family and friends. She attended many marriages, births, baptisms, graduations, and sporting activities. She had an amazing gift of caring for her family and friends. No one ever wondered where to go or if there would be food! She enjoyed serving her church and being involved in the hospitality crew. She played many games of 42 with her family and friends, even hosting a weekly game at her house. She is survived by her children and their spouses Donna Hoover Winbourn (Tim), Linda Hoover Gamble (Craig), and John Lewis Hoover (Holly), grandchildren, Meghann Skalak (Wes), Josh Winbourn (Heather), Ashley Ritchey (Josh), Kiley Roberts (Andrew), Coby Gamble, and Christopher Hoover, great grandchildren, Addie, Porter, and Josie Winbourn, Jack, Luke and Eli Skalak, Gentry, Clyne, and Autry Ritchey, and Ransom Roberts, her sisters Kay Kinchen, Nita Ginger, her brother C. M. Sparkman. She was preceded in death by her parents, husband, four brothers and two sisters

The family of Alice Sparkman Hoover created this Life Tributes page to make it easy to share your memories.

Send flowers to the Hoover family.